Angel, one of your Flock members, has been captured! It is up to you to rescue her. But beware the Erasers and Whitecoats that roam the halls. If they see you, the rescue is a bust!

Playing as either Max or Fang, the player must navigate the halls of the School using their arrow keys while simultaneously avoiding the whitecoats that roam around the building.

In the game, Maximum "Max" Ride is one of the two characters the player can choose from when prompted to pick their Flock member. She appears as a blonde girl with a blue shirt and brown wings.

Fang is the second option. His appearance is similar to the descriptions given in the novels, having retained his dark hair, dark wings, and dark eyes.

Whitecoats also make an appearance in the game as NPCs (non-playable characters).

Hunger—or the amount of energy Max/Fang has left—is displayed in a bar on the top left corner of the player's screen. If the bar drains before they reach the exit, the level is lost.

To refill the Hunger bar, the player can pick up foods such as pizza and cookies along the way to the exit. 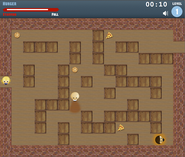 Add a photo to this gallery
Retrieved from "https://maximumride.fandom.com/wiki/Maximum_Ride_Rescue?oldid=18609"
Community content is available under CC-BY-SA unless otherwise noted.