Jeb Batchelder was a whitecoat who acted as an ally or an enemy of the Flock at different times. A parental figure to the whole Flock, he was the biological father of Ari Batchelder and Maximum Ride.

Before The Angel Experiment[edit | edit source] 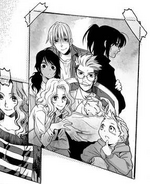 Jeb Batchelder worked for the corporation known as Itex. He donated genetic material to create Max. At some point, he married an unknown woman who died after the birth of their son.

When Max and the Flock were young, Jeb rescued them from the School and went into hiding in the Sangre de Cristo Mountains, Colorado. In the process, he left behind his son Ari, who would be turned into an Eraser. He became a fatherlike figure to the Flock, teaching them how to fight and to fly. However, after two years, Jeb disappeared without a trace, and Max became leader.

Angel, imprisoned and forced into experiments by the School, learns that Jeb is alive. She is unable to read his thoughts. Unlike the other whitecoats, Jeb shows her kindness and gives her food. He seems saddened when Angel says that she hates him.

Max meets him after being captured by the School along with the rest of the Flock. Max, seeing her savior and father figure back with the School and his fellow whitecoats, feels deeply betrayed, although Jeb tells her he's proud of her and that she was created to save the world. Later, as the Flock escaped, Jeb screams to Max that everything was a test and that she was safe at the School. Max, however, says she didn't think so, and flies off with the rest of the Flock.

Jeb encounters the Flock once more on a beach along Ari. There he repeats that Max must save the world, and says the mistakes she'd made in New York City had cost her and that she has to be more careful. He then leaves with the Erasers.

He is devastated when Max kills Ari, saying that Max has killed her own brother.

Jeb oversees Ari and a team of Erasers set on hunting down the Flock. Anne Walker is revealed to be his boss. Jeb is involved in kidnapping Max and pitting her against her clone, Max II, as part of more tests.

Saving the World and Other Extreme Sports[edit | edit source]

The School recaptures the Flock, and Jeb informs them that all of their adventures have been a simulation and they never left. However, when they escape, it becomes clear he was lying.

While Max, Nudge, Angel, and Total are imprisoned in a dungeon by the Director, Jeb visits them. To Max's shock, he speaks to her as the Voice. He asks questions, testing her to see her intentions. Jeb reveals that he is Max's father and that Dr. Valencia Martinez is her mother. Jeb is heartbroken when Ari dies.

Jeb is present at Ari's funeral, visibly grieving. He, along with Dr. Martinez, serve a parental role to the Flock, recommending that they go on a trip to Washington and eventually to Antarctica. Both Jeb and the Voice tell Max that they are not, in fact, the same person, but cryptically tell her that this is just "part of the picture."

He and Max have an uneasy relationship. When Jeb asked Max if she trusted him, Max replied, "No. But I trust my mother, and she apparently trusts you." Although Max believes Jeb's intentions were ultimately good, she is still wary of him after the torture he has put the Flock through over the years.

Jeb remains an authority figure to the Flock, while Max distrusts him. He encourages the Flock to attend the Day and Night School, but it does not work out.

Jeb, along with Dr. Hans Gunther-Hagen, introduces Dylan to the Flock. After Jeb takes a bullet for the Flock at Furious, Max partially forgives him.

Max is suspicious of Jeb's continuing association with Dr. Gunther-Hagen. The two are in a plane leading the Flock to the Gen77 school when the plane is destroyed. As the plane goes down, Gazzy catches Jeb but cannot lift him. Jeb intentionally lets go in order to keep from weighing him down, telling him as he does so that the human race will have to die to save the planet. Jeb nearly falls to his death, but is caught by Dylan.

Jeb later drives away with Dr. Martinez, who is acting strange. Max theorizes that Jeb planned the crash and kidnapped her mom.

Angel, held captive once more, finds that Jeb and Dr. Martinez are working with the enemy as they operate on her.

Jeb later appears with an army of Ari clones and announces sadly that Fang must die to protect him from Gunther-Hagen and others who would experiment on him for his immortality gene. After the conflict, Jeb weeps over the corpse of the cloned Ari, having tried in many attempts to bring his son back. Max breaks his ribs with a kick. When the Flock leaves for Paradise, she suddenly says they can't just leave the unconscious and wounded Jeb to freeze on the porch and to bring him with them. They bring him along, tied up securely, with Dr. Martinez agreeing that Jeb is sick but not evil.

Jeb somehow survives the Apocalypse. While looking for the Remedy, Max and Dylan find Jeb in the underground base called Himmel. Jeb confirms that he made the Horsemen by splicing Fang's genes. He has bought into Dr. Gunther-Hagen's plan completely. Max chokes him, then once she lets go, he tazes her. He straps her onto a gurney and is about to stab her with a syringe and convert her a Horseman when Kate and Star arrives. Max stabs the distracted Jeb with his own syringe. He ultimately dies after Kate snaps his neck.

As a child, Jeb was blond, as both Max and Ari later were. In The Angel Experiment, he wore wire-rimmed glasses.

In The Angel Experiment, Angel finds that she is unable to read Jeb's mind. Jeb is somehow aware of The Voice in Max's head and has the ability to mimic it.

Retrieved from "https://maximumride.fandom.com/wiki/Jeb_Batchelder?oldid=22779"
Community content is available under CC-BY-SA unless otherwise noted.