The Gasman is the second-youngest of the original Flock members and supposedly around 8. He earned his name from the fact that he frequently passes gas, although he is often called Gazzy or Gaz instead.

Before The Angel Experiment

Gazzy's mother sold him to the school for $10,000 when he was very young. At the School—as hinted at in The Angel Experiment—he was forced to undergo various dangerous experiments that would leave him sick and dying. He eventually escaped with Jeb Batchelder and the rest of the Flock and went hiding in the Sangre de Cristo Mountains.

Gazzy first appears as Max is looking for food in the kitchen of the Flock's first house. He displays flatulence and an ability to mimic voices perfectly. When the Erasers attack, Gazzy is knocked out.

Max leaves Gazzy and Iggy behind at the house so that they'll be safe. The two prepare traps for the Eraser's return, and wind up blowing up the house. After that, they follow the others to Lake Mead and meet up. When the Flock is captured and taken to the school, Iggy and Gazzy manage to escape and return with an army of hawks to rescue them.

Angel has collected information from the School, including that the siblings' parents sold them. Gazzy becomes furious with his parents.

After another failure after days of searching New York, Gazzy starts crying and says he wants to eat. The Flock visits Garden Tavern, but the waiter refuses to serve them food. Gazzy and the rest of the Flock fly out of the Garden Tavern by smashing a window. They are later on the newspapers.

The Flock finds more information on their parents at the Institute for Higher Living. Despite his previous anger, Gazzy is overjoyed to find pictures and an address for his mother and father.

As the Flock flies towards Washington, D.C., Gazzy teases Max by pretending to see a UFO. Like the other kids, Gazzy fights back when they're attacked by Erasers. He hands Max bandages to try to help Fang, who's wounded.

Gazzy is the first to disobey Max and refuse to leave as the paramedics approache The others follow suit and Max later admits to herself that it's better not to split up the Flock. While at the hospital, the kids aside from Max and Fang are taken into another room by FBI agents and offered food. Although they're hungry, none of them eat until it's proven the food is safe. Gazzy is the first to finish his food and asks for two more trays.

When interviewed, Gazzy gives his name as Captain Terror (spelled Teror) and claims to have never seen an Eraser. The agent is surprised to realize that Gazzy is only eight, because he's tall for his age.

When they stay overnight in the hospital, Gazzy immediately volunteers to sleep on the floor so that the girls can have the bed. Max calls him a sexist piglet and has him and Angel, the two smallest, take the bed so that they can fit.

When at the hospital, Max sees herself as an Eraser in a mirror. She gets freaked out and hopes it's not the beginning of a new skill. She is reluctant to tell the Flock.

At Anne's house, Gazzy explores the property with the others. He seems most excited to see the pond where they can swim, and shows Iggy the pigsty, saying that pigs are lucky because "no one cares if they're dirty or live in a pigsty." He's nearby whistling when Max first hears Total speaking, and Max assumes that Gazzy is using a voice-throwing trick. The whole Flock continues to try to break the code of the files they took from the Institute, with no luck. Fang and Max later find a lead and visit an address connected to Gazzy's name, but have no luck other than finding an old photo of Gazzy as a baby.

Now attending a normal school, Gazzy gives his name as Zephyr. However, his upbringing leaves him confused by some games and interactions, leading him to accidentally encourage another kid to jump off the jungle gym. The kid is injured and a larger boy yells at Gazzy for this, leaving him hurt and angry. Frustrated by this and by a kid who put a "kick me" sign on the back of Iggy's shirt, Gazzy and Iggy set off a stink bomb in one of the bathrooms. Gazzy claims innocence when questioned by the principal. On the way home, he mimics Max and the principal, making the other kids laugh. Gazzy seems ashamed and apologizes when Max scolds him, and he and Iggy reluctantly promise to behave.

Some time later, however, Gazzy and Iggy meet up at recess and begin to explore the building. They enter the basement and overhear the principal ordering some files destroyed. When cornered, they set off a bomb, activating the building's fire alarms. This time the principal proves their guilt by finding traces of black powder on Gazzy's hands. The Flock is grounded, and Gazzy is mournful about the loss of dessert. After this he and Iggy behave in school, but they go exploring again and this time find more information on the school's past, as well as a secret tunnel beneath the building.

Gazzy seems unhappy that Iggy is leaving after finding his mother and father, but still comes along. Once Iggy is gone, Gazzy seems "practically catatonic." After the Flock is reunited and heads to Florida, Gazzy bumps Iggy playfully in midair, accidentally causing him to drop Total. He later pleads to go to the beach and, like the others, is distressed when Max attempts to cut the chip out of her arm. At the end, he uses a bomb to break the Flock out of Itex.

Saving the World and Other Extreme Sports

While Fang and Max are away, the rest of the Flock is captured by the School. Gazzy is deeply hurt by Angel's betrayal, but learns later with the rest that she was acting as Max's spy. He is also heartbroken when told that his mother sold him to the school for $10,000.

When the Flock splits up, Gazzy goes with Fang and Iggy to California.

While being held captive by the Uber-Director, Gazzy displays a new power of emitting noxious green gas.

Gazzy excels in Navy training, but when the Flock visits the beach, is stung by man-o-war and has to be treated.

While on the sub, Gazzy, Iggy and a Navy weapons specialist come up with the plan to destroy the M-Geeks.

Gazzy creates personalized fireworks for the Flock's birthday celebration. When Angel leads the Flock, Gazzy goes to Furioso with the rest, but succumbs to the effects of the poisoned water supply. At the end, Gazzy is summoned along with the rest of the Flock to save Angel and Fang from Dr. Gunther-Hagen's lab.

At Total and Akila's wedding, Gazzy and Angel walk down the aisle together as part of the wedding party. He is struck by disbelief when he learns later that Fang has left the Flock.

While in Paris, Angel and Gazzy go undercover among the Doomsday Group, with Gazzy using the name Andrew. He later tries to disarm the bombs while people evacuate.

The book begins with Gazzy and other members of the Flock attending school. He, Nudge and Iggy spy on Max's date with Dylan and attempt to film it, but the date ends abruptly when a candle burns down their treehouse. Fang returns with news that Angel is alive, so they go to rescue her. Afterwards, the Flock battles Eraser clones and Dr. Martinez returns to take them to the island of Paradise. Like the others, Gazzy receives his own personalized treehouse, but Nudge still yells at him for getting on her bed. When Dylan sounds the alarm, Gazzy and the others take shelter in the underground caves just before the meteor strikes.

The Flock, including Gazzy, are still living on the ruins of the island when a volcano goes off. They stop in Australia and split up. Gazzy goes with Iggy to Pennsylvania to search for survivors, and encounters a troop of girls living in an underground silo, led by Jackie. The two boys are imprisoned and forced to clean sewage, where they are found by the Horseman. Gazzy appears to die setting off a huge explosion to stop the Horseman.

However, he is revealed to be alive with the rest of the Flock in Russia. When told that Fang is dead, he laughs at first before realizing that it's not a joke and looking horrified. He aids in the final battle against the Remedy's forces, setting up a tree catapult with Iggy and later throwing grenades.

Years later, the Flock lives safely in Peru and Gazzy is described now as a "tall, lanky fourteen-year-old."

The Gasman has fine blonde hair and blue eyes, and he is tall for his age like the rest of the Flock. The color of his wings has never been mentioned, but his wingspan is 10 feet, as described in MAX. In School's Out - Forever, Angel says that he had the DNA of a "sturdy" bird, like an owl. Fang, on the other hand, compares Gazzy to an emu in The Final Warning.

Gazzy has a typical eight year old's sense of humor. He tries to act tough, but is still a little boy who wants physical affection and reassurance.

Gazzy is revealed to be afraid of spiders in School's Out - Forever. He is also afraid of the whitecoats and being captured and experimented on again, as is the rest of the Flock.

He can mimic any sound or voice, which he usually uses for pranks, but which also aids him in combat and stealth situation such as the covert ops training in MAX.

Gazzy is highly knowledgeable when it comes to making explosives, working as partners with Iggy. In School's Out - Forever, he and Iggy repeatedly detonated homemade explosives inside the school, getting the Flock into trouble. However, this talent has also come in handy multiple times for getting rid of Erasers, M-Geeks, and other foes and breaking the Flock out of traps.

He also displays knowledge of pyrotechnics in FANG, where his birthday present to the rest of the Flock is fireworks with the letters of their names..

The Gasman derives his name from his frequent flatulence. Max considers this merely a digestive issue in the first book, but in The Final Warning, he manifests the new mutation of releasing a noxious yellow-green "mushroom cloud" of gas.

The Gasman and Iggy are best friends, and often work together to build explosives, pull pranks, or do tasks for the Flock. Iggy is described as Gaz's best "partner in crime." It is hinted that Gazzy also looks up to him.

Gazzy is Angel's older brother. They are the only members of the Flock who are biologically related. He cares deeply about her.

Max acts as mother to Gazzy. Because Gazzy tries to act tough in front of the rest of the Flock and for Angel, Max usually holds his hand since he is still a child inside.

Fang is somewhat like a father to Gazzy. In Saving the World and Other Extreme Sports when the group splits up, he holds Gazzy's hand while Max is gone. 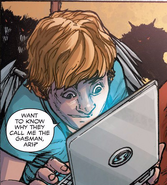 Max Ride: First Flight
Add a photo to this gallery
Retrieved from "https://maximumride.fandom.com/wiki/Gazzy?oldid=22564"
Community content is available under CC-BY-SA unless otherwise noted.